A Declaration of Sizeable Intent 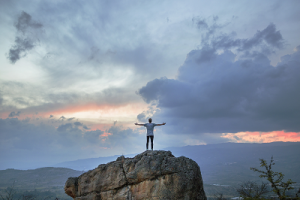 We’ve already covered a fair bit of ground, but you may be saying, “Hey, wait a minute! You’ve made a lot of provocative statements without backing anything up yet.”

You’re right. Although, you’ll have to admit that I made my intentions clear from the start.

My goal was to attempt to allow you to hear Jesus’ words afresh. As His audience may have heard it. And while I admit that I do not have some insider information (okay, I confess: I wasn’t present in first-century Israel), I am convinced that the tone of what I’ve said is in harmony with the melody of Jesus’ message.

But now let’s surf some Scripture.

This is the fourth article in our series on Messy Dogma, as we grapple afresh with the Message and Mission of Jesus. In this second of four parts, we’re fussing with the Substance of Jesus’ Message, His explosive revolutionary words. You may find it helpful to start at the beginning with the first article, Year Zero: The World Jesus Invaded or peruse the explanation to this series with all its disclaimers.

A Declaration of Sizeable Intent

I’m going to bleed the statements I made in the last article into the next three posts as we search the Scriptures together. It will give you a chance to wrestle through whether I’m onto something … or it may confirm just how hard I’ve hit my head. Jesus made Himself clear the minute He sensed the timing was right to fulfil the purpose for which He’d come. However, based on the message we hear from much of Christendom, you might expect He launched His ministry with any one of the following statements of intent:

While there is, of course, nothing wrong with the bullet points listed above, they are not the message. While they may speak to benefits of God’s amazing grace, Jesus’ message was the Gospel of the Kingdom.

It is important to remember that both the words “gospel” (Greek: evangelion) and “kingdom” (basileia) were not stuffy religious anecdotes, but first-century political terms used by the Roman Caesars themselves. When Augustus Caesar ascended to the throne, he presented his gospel of the kingdom—his dream of a utopian society—declaring that his reign would bring favour upon the world and its inhabitants. Of course, his citizens—many of them slaves—were forced to applaud even though they knew another bout of tyranny was at hand.

One cannot overstate the full weight of Jesus’ use of these highly-charged political words given the context of His day.

He was announcing a completely new way of thinking and living, a brand new story, a message that entirely trumped the Empire and superseded allegiance to Caesar. Jesus was heralding a new framing reference point, an altogether unique frame story.

But in case we’re tempted to think of the Gospel of the Kingdom as some abstract, even esoteric concept…

In what appears to be His first public contribution at a synagogue, Jesus used the infamous passage from Isaiah 61:1, 2 to blow the hinges off any false misunderstandings that He might have garnered to that point.

When Jesus read from the prophet Isaiah, His audience, no doubt, warmed to the familiar words: “The Spirit of the Lord is upon Me, because he has anointed Me to preach the gospel to the poor; He has sent Me to heal the broken-hearted, to proclaim liberty to the captives…” The way Jesus read this passage and His brief comments afterwards were enough to cause His audience to initially marvel “at the gracious words which proceeded out of His mouth” and wonder about His true identity. “Is this not Joseph’s son?” they asked, almost half expecting that He’d take off a mask and cape in some first-century equivalent of a Zorro reveal.

Yet in less than five verses—no more than three minutes of preaching—Jesus went from hot to not. His audience was “filled with wrath and rose up … that they might throw Him down over the cliff.” Wow, tough crowd! What made Jesus go from the flavour of the month one minute to a tart, bitter taste in the mouth the next?

The audience that heard Jesus quote the prophet that day evidently sympathised with the poor cretins who needed help; the crushed who needed a shoulder to cry on; the captives who needed a defence; the indebted who needed assistance. It seems that they were only too happy to spare a pious moment to think about the plight of the disenfranchised in their midst. And hey, if Jesus was going to fix the problem; then, well, “Goodie for Him. About time someone dealt with the riff-raff and all that stuff ‘ol chap!”

While their attitude is one too common in Christendom (and if I point a finger, I have four pointing back at me!), our interpretation (and revisionism) of this passage today might in fact perpetrate the problem in grasping Jesus’ message.

Attending a popular conference once, I remember hearing the key-note speaker teaching on this passage by spiritualizing every item in Jesus’ quote from Isaiah 61:1, 2. He defined the mission of the church as ministering to those in need of inner healing, soul deliverance, spiritual blindness and those with various sorts of emotional bondage.

While there is no question that God desires to heal people afflicted in these areas of need, Jesus was referring to the literal “poor”—as in those without food or shelter—those really “captive”—as in those ‘behind bars,’ more than likely, victims of a corrupt justice system—those in need of physical healing and “recovery,” and those forced into financial debt by the abusive regime of the day; hence, the proclamation of Jubilee, or the “acceptable year of the Lord.” In short, Jesus was referring to those victimised by the exploitative, unjust systems of the Empire. (You may want to read that last statement again.)

Yes, of course, these precious people may very well also need inner healing and the like. However, re-categorising these intentions of the Spirit into spiritual (abstract) needs fails to appreciate just how practical, earthy and “down here and right now” Jesus’ message was. And along with so much other revisionism, it turns our message into one that addresses mankind’s spiritual issues while turning a blind eye to the secular, societal issues of our day. (That last sentence is critical.)

Jesus’ audience in the synagogue nodded smugly until he turned to some examples in Scripture. They were more than happy with Jesus spouting the need to help the poor in their fold, but when He mentioned Zarephath and Naaman—two Gentiles—they suddenly realised the Man had the audacity to actually expect them to affect change … not just where they were comfortable, but in the big, bad, dirty world at large. In society itself. Among those people.

Jesus’ message addressed the immediate, real, seemingly insurmountable societal ills of His day, and He expected His followers to contend for both immediate change where possible, or to demonstrate righteous vigilance where broader, sweeping changes in society were more gradual.

When our message becomes truncated to address the spiritual/abstract issues only, we fail to appreciate the real issues in which people live, and our message either goes over their heads or, as is becoming increasingly the case, our message sounds condescending and appears detached from reality. This is certainly true in Western World nations where society is becoming weary of our ‘gospel of salvation’ message. And the louder we shout it, the more distasteful it becomes.

I think that in Third World nations where people are in truly desperate immediate need (and a better future on earth is truly beyond them due to extreme poverty, rampant disease, corrupt tyrannical leaders and systems, etc.), a ‘gospel of salvation’ message that promises them a better life post-mortem helps them to “escape” their desperation, and offers them ultimate justice. And in this sense, it is helpful … and it has a measure of success.

However, from my reading, I think there is a growing awareness among Christian leaders in Third World nations that the ‘gospel of salvation’ message is not nearly enough. And the bottom-line is this: Jesus ministered to a people who were far closer in standing with the Third World than the Western World. His Kingdom message zeroed in on the earthy issues of the day, the root issues: the social ills and systemic injustices that caused the pain and suffering. Ours should, too. Whether we’re ministering in the Western World or the Third World.

We look at some more Scripture in the next article.

An Uprising: Revolutionary Talk Offending the Good; Applauding the Bad