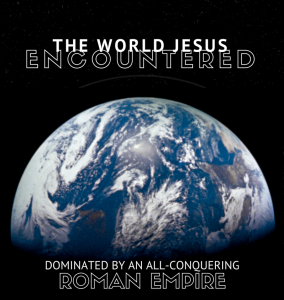 God stepped into a specific time and space in human history bringing one covenant to an end, inaugurating a new covenant. Time was split in half, man’s trajectory was forever altered, and mankind’s history was permanently changed. It was every bit like an alien invasion. Although not at all like one. In hindsight, we know it was an act of incomprehensible love: God redeeming His fallen creation. In Year Zero1, it was brutal, revolutionary, disorienting. Confronting.

This article kick-starts our series on Messy Dogma, in which we seek to get a fresh handle on the world Jesus came to … and the Empire He confronted. In doing so, we grapple with the “big picture” background to Jesus’ ministry. I recommend that you read the explanation to this series and its disclaimers on the Messy Dogma page, if you haven’t yet. The big picture2 of Jesus’ day was essentially one of oppressive domination by the Roman Empire captured in the (coerced) allegiant profession, Ceasar is Lord.

While this may be immediately obvious, what is sometimes overlooked is the degree to which the Jewish people—obviously, the people to whom Jesus primarily aimed His ministry (Matthew 15:24)—were completely entrenched within this crippling framing reference. If we fail to understand the implications of this, we’ll struggle to grasp the intent and weight of Jesus’ message.

Despite how holy and separate the Jews sought to remain (and their stubborn resistance to the Empire’s oppressive regime was admirable), they reacted in four different ways to the framing reference of their day. Think of these four reactions as defining systems of thought (belief) and practice (lifestyle). There’s no doubt that most of these groups believed they were acting in response to revelation from God. Some sought to escape it: the fatalistic Essenes offered the confused Jew the chance to bury their heads in the sand, literally. Withdrawing into the wilderness, they sought to flee the oppression. Some sought to confront it: the Zealots offered the fanatical Jew an outlet of militant aggression. Calling for repentance from complacency, they sought liberty through aggressive resistance; leaning on the stories of the Old Testament’s military heroes.

In a similar spirit of confrontation; however, using a different tactic, some sought to resist it: the Pharisees also preached repentance, but called for a return to meticulous piety, believing that only scrupulous religion would deliver God’s people. “If we’re just holy enough, God will deliver us!” Finally, some sought to coexist with the Empire: the Sadducees and Herodians offered the compromising Jew an alliance with the Empire. Despite their differences with each other, both the Sadducees and Herodians bought into the basic line: “If you can’t beat ’em, join ’em”—or at least, try to coexist with the “big picture” in ways that benefit you.

Therefore, despite their attempts to remain a people set apart, all these knee-jerk reactions to the Empire’s dominant frame story served only to reinforce the centrality of Caesar, exacerbating the overriding systemic injustices, perpetrating the political, societal and religious oppression of the time. In other words, these very systems of thought (no doubt, perceived by the Essenes, Zealots and Pharisees as revelation received from God) kept the Jewish people enslaved to Caesar—some profiting from the Empire, most exploited by it, all bound and dependent on it.

Think about that for a moment.

Tragically, for all their bravado and bluster, these defining systems only existed because they’d accepted (and were thus, aligned to) Caesar’s Empire. They were, in fact, cogs in Rome’s societal machine. Like a self-cannibalising fungi, they sprouted in the soiled, septic shadow cast by Caesar. Think Neo stuck in the Matrix—a movie that remains a startling metaphor for us. When the Caesars proclaimed their ‘gospel of the kingdom’ (note: political language), declaring that their reign would bring favour upon the world, the citizens and slaves of Rome, both Gentile and Jew, were assured of one thing: those rightly aligned to Caesar, and assiduously paying the required dues, would remain beneficiaries of the Empire. The rest would remain subject to successive bouts of the tyrannical ruler’s oppressive and capricious reign. The juggernaut of the Empire would charge forward relentlessly and thus, these defining systems would continue to propagate its toxic values. Despite their utter devotion to Jehovah, and abhorrence of Caesar, the systemic injustice of the Empire sprouted in every corner of the Jewish nation. They paid homage to God, but lived lives defined by Caesar. (This last sentence is distressingly poignant.)

Into this inexorable darkness, this inescapable, festering brew of injustice and oppression, Jesus arrived with a radical, otherworldly message. Using the same politically-charged language, He proclaimed His Gospel of the Kingdom, a message that wasn’t another reactionary system defined by (or against) the Empire. Rather His message was a call to a wholly different way of thinking and living, one that trumped the entire frame story of the Empire, one that superseded the framing reference point of Caesar. Jesus is Lord.

This is crucial to grasp. Jesus told a brand new story. He presented a totally new big picture: one that addressed the dominant framing reference of His day, a message with immediate and dramatic societal ramifications.

Thus, in a very substantial way, Jesus’ arrival was akin to an alien invasion3. A brutal confrontation with the flawed and corrupt Empire and its societal systems of the day; a head-on collision with the systemic backdrop (worldview) that was the literal framing reference of the people, both Gentile and Jew. His message, and the manner in which He demonstrated it, was nothing less than otherworldly.

What’s the key point to ponder?

How much of church as we know it, is just as guilty as the Jews of Jesus’ time? The same reactions of escape, confront, resist and coexist are rampant today in God’s people because too often, we’re reacting to the dominant framing reference of our day.

This is a crucial consideration that we cannot afford to dismiss offhandedly. Please give it serious reflection. And then ask: “So, how much of my life and ministry is likewise in reaction to the dominant framing reference of my day?”

Where we’re going next?

Before we unpack what the big picture (or prevailing frame story) of our day is, let’s dig deeper into Jesus’ day, specifically turning our focus onto the Melody of Jesus’ Message.

1 There is technically no Year Zero in the Julian calendar or the Gregorian calendar. The year 1 B.C. is followed by the year A.D. 1. I’m using the phrase Year Zero to refer to the world, and all its contemporary influences, that Jesus encountered.

2 In speaking of the “big picture,” I am also going to use the phrases dominant framing reference and prevailing frame story.

The phrase ‘frame story’ is a literary technique, a narrative structure that refers to an overriding framework connecting a series of unrelated stories. It’s the big-picture storyline that provides context to seemingly unconnected secondary tales. For instance, if one doesn’t know that the Old Testament traces the Messianic line, its overriding ‘frame story’, the many minor subplots—as thrilling as they are—might appear either irrelevant or meaningless. Take, for example, the shocking story of Judah’s immoral act (Genesis 38). The account doesn’t teach doctrine, doesn’t reveal any consequence to the crime, and doesn’t even reveal God’s perspective on the atrocity. Reading the incident on its own, the reader can be left frustrated and confused by its inclusion, especially as it seems to interrupt the amazing story of Joseph. However, it merely serves to reveal the Messianic line of David through Judah and Perez (Genesis 38:29; Ruth 4:18-22). Knowing how it plugs into the ‘frame story’ gives it meaning.

3 I hope that any concerns you may have about the use of the word “invasion” have been assuaged. I realise that the word may be associated with militant religion. However, I trust you’ve noted that I’ve made reference to the Spirit of love (anti-militant) in which Jesus ministered. The reality is this: Jesus encountered a world in which life was cheap and the backdrop was militant domination. Thus, His arrival was, as mentioned, akin to an invasion—even though His battle (like ours) was not against flesh and blood (Ephesians 6:12).